The History and Future of Restaurant Technology

by Luke
in TECHNOLOGY 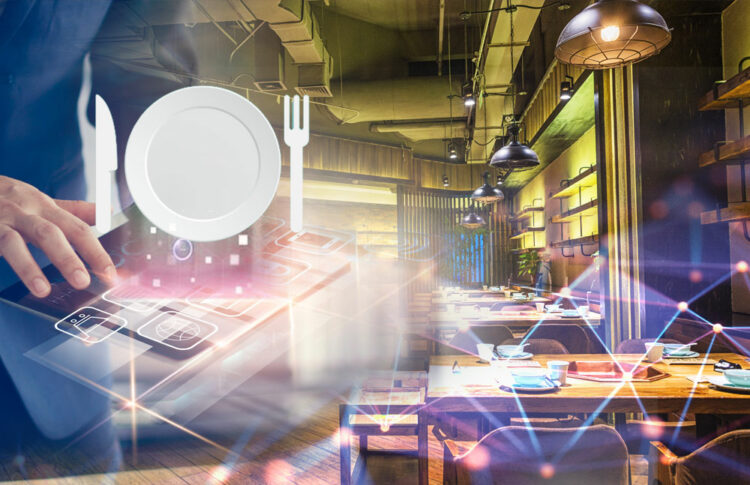 In the modern world, technology seems inseparable from the day-to-day workings of life as we know it. We see technology in nearly everything we do, whether it’s computer systems that manage the functions of our cars to the supercomputers that live in the pockets of millions. With technology as ubiquitous as it is, it’s become harder to visualize the world of even a few decades ago. The progression of technology in restaurants has undoubtedly marched toward a more comfortable and convenient experience for diners and restauranteurs alike. But where did we come from, and where are we going? Looking at the marriage of food service and tech over the twentieth century, it might be possible to get a glimpse of what’s coming.

It’s strange to think about what elements of the modern restaurant experience are taken for granted. Point-of-sale systems have transformed dramatically over the years. In many quick service restaurants, for example, cash registers had physical buttons with specific item names printed on them, with additional buttons to add common modifiers to menu staples. This system dates back even further than one would think, with the first iteration being documented as early as 1879.

Advancements in POS tech progressed steadily throughout the twentieth century, with the first computerized systems invented by IBM in the 70s. Notably, the technology that sent and printed orders to kitchen stations and the first touch-screen POS system were both invented by the same man: Gene Mosher, a restaurant owner and operator in New York City in the seventies and eighties. Touch screen point-of-sale systems had been implemented en masse by the late 1990s, leading to popularly used systems like Aloha.

Credit card swipers as a restaurant tech mainstay are also a relatively new innovation. Credit cards date back to the 1950s, but the very first modern credit card was born in restaurants, specifically with the Diners Club card. Mechanical card readers existed for a few decades before the implementation of the magnetic strip, which more safely stored customer information. This drive for customer protection later resulted in installing microprocessor chips and Personal Identification Numbers (which regular human beings call PINs) to allow businesses to access customer information.

Even after credit cards’ debut in the dining experience, there were additional wrinkles in their implementation. Discover, and American Express cards were famously not accepted in some businesses due to their higher interchange fees. Though this is largely an element of antiquity at this point, it’s still not uncommon for some diners to ask if businesses accept their card of choice.

It’s odd to think of menus as an element of restaurant tech, but in truth, they grew alongside the modernization of the dining experience as it exists today. Once upon a time, it was common for dining establishments to prepare a single meal to serve to everyone; the concept of ordering something specific cooked to order was an innovation in its own right. The first modern iteration of a menu was born in eighteenth-century France, and the trend popped up in America in the nineteenth. Early menus, though, were organized based on the whims of the restaurateur and grouped dishes based on how they were cooked. The idea of organization based on coursing was implemented later, as was another significant innovation with modern printing. Early menus were often handwritten, but printed menus became mainstays as dining out became a cultural cornerstone.

READ:  Basic Concepts Of Mean, Median And Mode With Examples

The twentieth century also created some modern mainstays in dining culture. The first online takeout order was placed with Pizza Hut as early as 1994. A few years later in 1999, online reservations were born, and back-of-house management technology came from the nineties too. The twentieth century brought together elements that constitute the modern dining experience, and that experience is worth examining too.

So how have the elements above manifested in their modern forms?

POS systems have advanced in leaps and bounds. Not only are POS systems touch-based, but they’re often portable. For example, POS platforms like Toast and Square can utilize full POS systems from mobile phone apps or tablets. These apps also use a cloud computing platform that manages everything via the internet instead of hardwiring systems that must be built into a restaurant’s design. This points to the unifying principle that guides much of modern restaurant design – everything has been designed to work around the technological staple of the twenty-first century, the cell phone.

In the modern form, payment methods have extended to tap-to-pay or mobile phone payment solutions. It’s not even necessary in many businesses to have a credit card present for payment when you have a phone on your person, provided that you have a payment solution of some kind set up. Some restaurants and pop-ups even accept payment through mobile transfer services like Venmo or Cashapp. Payment systems are more personal and secure than ever before, even if there’s always room for them to improve.

Menus, too, have also pivoted to center around cell phones. As a result of the COVID-19 pandemic, QR codes were implemented en masse as a contactless solution for menu access or online ordering. Typically these QR codes lead to an online menu designed to be viewed on a mobile browser. Though the pandemic no longer exists at the severity of its earlier days, most restaurants have discovered the advantages of online hosting for their menu systems. Online menus can be updated on the fly to add or remove menu items to reflect inventory. Furthermore, they can display detailed allergen information without cluttering a physical menu and other useful diner-focused features.

What Dreams May Come

What does the restaurant for tomorrow look like? There’s no way to know concretely, but we can certainly guess. The timeline of restaurant progression shows a clear trend of prioritizing customer ease of use and removing steps between processes. It’s natural to wonder how these might progress.

In the modern era, reservations are popularly made online, and some platforms like Resy include a system for adding customer payment information in advance. At present, this is done in the service of ideas like cancellation fees, but there’s no reason to believe it will stop there. In the future, this could lead to a reservation doubling as a tab started in advance; the payment information could be stored on a check and charged at the end of the dining experience. POS systems and online menus could merge, too; restaurants like BarTaco already have self-service ordering from the table via diners’ mobile phones. The future menu could include allergens and salient information about cross-contamination, but this is just the beginning. Tomorrow’s menu could show quick clips of prepared dishes to help guide guests to the dishes they’re looking for.

Restaurant robots are becoming commonplace in some forms too. Seating tables might become the purview of automated systems in the not-too-distant future, with workers able to send information directly to the system with information about when tables are available. Similarly, many restaurants have begun equipping their booths with built-in tablets that allow for ordering or calling for assistance when needed. Overseeing operations of restaurants themselves may always need a bit of human touch, but there’s no reason why some of the minor workings couldn’t be automated.

It’s hard to guess what restaurants might look like in future years. Judging solely on the leaps and bounds that have been made in restaurant tech in the last century alone, though, the days to come will be fascinating to witness. Tomorrow’s restaurant might be just around the corner, and the future looks bright.

How Has the Online Casino Industry Changed as a Result of Technological Advancements?