Everything About Peel Remote Smart

The Peel Remote app has deteriorated over time, from one of the best universal remote apps to one of the worst Android apps. Nonetheless, a few smartphone manufacturers have the audacity to include it as a pre-loaded feature.

The Peel Smart Remote app was extremely popular among tech enthusiasts in its early days, when the concept of a “universal Android phone remote” was still new.

The Android App was first released in 2009 and has amassed 25 million users in just a few years. Furthermore, agreements with smartphone manufacturers such as Samsung and HTC quickly made it into one of the most downloaded smart remote applications, with a user base of 70 million.

However, the software has been heavily criticised for a number of reasons. The Samsung TV remote app has bombarded users with lock screen advertisements and overlays, as well as sneaky methods to keep it running in the background.

The half-hearted move also did not address many issues with the Peel Remote App, despite the fact that the company threw a switch in the settings menu to turn it off.

What exactly is the Smart Remote App for Peel?

It is a universal remote smart app that basically turns your smartphone into an all-in-one remote, allowing you to monitor appliances like televisions, air conditioners, setup boxes, and even gadgets like Roku, as well as a few smart devices.

The remote App makes use of the device’s built-in I.R. blaster, which is only available on a few smartphones, to transform it into a universal remote. Alternatively, WiFI can be utilised to monitor a few supported machines. 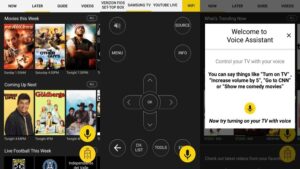 The TV guide allows you to choose from a variety of shows and episodes. You should look up “what’s trending” and “recently viewed.” The guide makes personalised recommendations and presents information on the following shows.

Physical Remote Replica Remotes available in the App, like traditional remotes, have all keys, making it simple to change channels in the moment. You can even acquire a personalised remote and add your own stations.

The graphical interface makes it simple to traverse the application’s numerous sections. The transition between channels and guides, in particular, is smooth.

The App also allows you to instantly cast YouTube content to live streaming devices such as Roku and Chromecast. Voices are regulated.

The voice assistant in the App can aid you in monitoring your television’s fundamental tasks, such as “Turn on T.V.” or “raise volume by 10.” However, this is only applicable to a few televisions.

How to Connect a Remote Peel App Device? 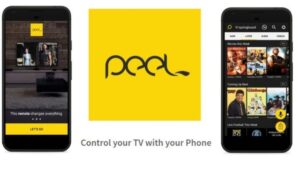 Peel Remote WiFi Configuration Peel can also be used with devices that do not have I.R. technology.

If you launch the App, you will see a pop-up window that will allow you to configure the wifi system.
As of present, just a few gadgets can be controlled via wifi.

This is important to note that the phone and the device must be on the same network for this to work. 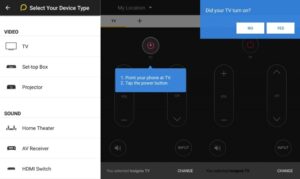 The I.R. blaster, often known as an infrared blaster, is primarily used to monitor all electronics using a universal smart remote app. It is a smartphone sensor that emulates electronic remotes found in a few products, such as a television remote, an air conditioner remote, and so on.

Then follow the steps below if your phone has an I.R. blaster.

How to Configure a Smart Remote Peel.

Once you’ve configured the buttons, you may use your Android Remote to power your TV or any other device.

Putting the Peel Remote Button to the Test

If the first button test fails, you can look for alternate buttons until you find one that does.

Once you’ve set up a single device, you can connect other devices to the same location. For wifi, simply tap the Plus icon directly below your name.

Why are they questioning the Peel Smart Remote App?

Peel Remote Control The Google Play Store has received little customer feedback. Peel Remote has been scrutinised for more than a year because of the drastic means to raise funds. In 2017, the app developed a deceptive advertising strategy that included unethical lock screen ads and overlays.

The programme began placing adverts above the lock screen without any authorisation. As a result, individuals were irritated since they had to unlock their phones every time. They did, however, see an advertisement. Surprisingly, there was no method to turn it off in the App.

Some other excellent examples Apps for Universal Smart Remotes

How to get the Peel Remote Software removed?

Another reason users dislike the remote Samsung smart app is its bloatware. Smartphones that come pre installed with a remote peel virus do not allow consumers to uninstall the Android App normally. The only solution is to uninstall it, but many have reported that the App is reappearing.

Let’s see if that’s something we can fix. what is Peel Smart Remote App will get rid of you in the following manner:

How to uninstall the Remote Peel App 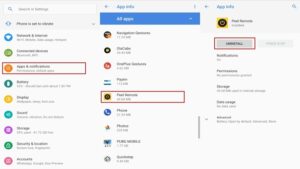 On your Android smartphone, navigate to the App Settings menu.

Look for the ‘Peel Remote App’ in the App Manager.

Select the “Uninstall” button if it is open to remove your computer from the what is Peel remote app.

If the Uninstall button is not present, click the ‘Uninstall’ button to disable the software.

The App would be removed from the app drawer if the deactivate function was used.

However, multiple users have reported that the programme resurfaces on a regular basis. If it keeps reappearing, follow the procedures below.

How to remove Peel Remote App 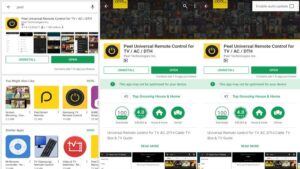 Navigate to the Peel Remote App in the Playstore.

On the upper right, press the three-dot vertical button.

By deselecting the ‘Trigger automatic update’ checkbox, you can disable automatic software updates.

Although there is no Android Universal pill Remote app that is as terrible as the open Peel Remote, there are a number that use the same obnoxious techniques such as bombarding commercials, stealing memory chunks, and other things.

What is a Magnet link(magnetdl)? All About Magnet Link Downloader