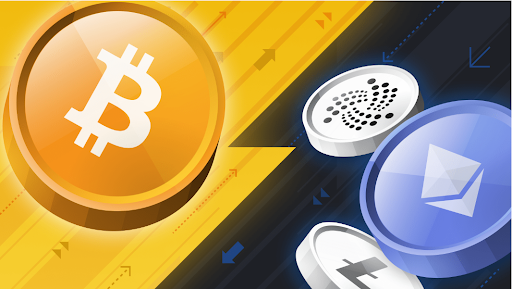 Since its inception by Satoshi Nakamoto in 2009, Bitcoin has continued to be the most popular cryptocurrency. Beyond Bitcoin, there is a massive universe of cryptocurrency, though. These cryptocurrencies are frequently referred to as “altcoins,” which is short for “alternative coins.”

Altcoins are digital currencies that are usually based on the Bitcoin blockchain and datastore, but they might have varied functions depending on the blockchain they’re built on. Thousands of different cryptocurrencies are currently available.

The largest altcoin is Ethereum (ETH), which is the second-largest cryptocurrency by market capitalization. What you need to know about alternative currencies, how they differ from Bitcoin, and how they operate is provided below.

Simply explained, all cryptocurrencies besides Bitcoin are known as altcoins. They were created using a peer-to-peer system and a comparable blockchain framework to mimic the success story.

The term “altcoin” is a compound of the words “alternative” and “coin,” and refers to cryptocurrencies that are forks, splits, or forks of the underlying blockchains for which they were originally developed.

Altcoins use blockchain technology in much the same way as Bitcoin. A distributed digital database called a blockchain is being simultaneously updated by numerous computers around the world.

Blocks of data representing new transactions are validated and added to the blockchain. Once they are broadcast on a blockchain, transactions cannot be undone.

Some altcoins can be used as a way for token holders to weigh in on project matters, while others may act as an internal currency on a blockchain network. Some are purely speculative.

There are many different kinds of altcoins, and they may be categorized according to how they function and how they establish consensus.

A stablecoin is a cryptocurrency whose value is tied to the value of a different asset, usually the US dollar. Stablecoins attempt to maintain an analogous coin price to the underlying asset’s value. Examples of stablecoins include USD Coin and Tether, which form the well-known trading pair APT USDT.

Services within a network are offered using utility tokens. Purchasing NFTs, trading, minting, and redeeming prizes are just a few of the tasks that may be accomplished with utility tokens.

A governance token is a coin that grants its owners the ability to vote on project decisions. The voting mechanism is usually proportional, thus the more tokens a person has, the more influence their vote has on suggestions for governance.

Security tokens are digital assets that reflect stock in a company or a financial instrument like debt. Tokenization is the process of converting an asset’s value into a token that can subsequently be sold to investors.

This phenomena happens when a well-known individual discusses a cryptocurrency on social media, which raises the price of the cryptocurrency in question. For instance, Dogecoin’s price briefly increased when Elon Musk sent cryptic tweets about it.

The Difference between Altcoin and Bitcoin

While all cryptocurrencies use the same underlying mechanism to create new digital coins, Bitcoin differs from altcoins in that it uses a much more energy-intensive system known as proof-of-work.

Digital currencies having unique features and functions include bitcoin and altcoins. The basic goals of Bitcoin are to increase transaction efficiency and lower transaction costs that involve third-party intermediaries.

READ:  How to Take Screenshot or Screen Record on Apple TV

The blockchain is a digital database where bitcoin transactions are recorded. The method does not need the revealing of any personal information, though, as the transactions are anonymous and simply involve numbers that do not identify a user.

Furthermore, altcoins have attracted a lot of investors, resulting in a crowded and competitive market in the cryptocurrency space.  This has led to many benefits.

How to Purchase Altcoins?

Altcoins can be purchased on reputable exchanges like KuCoin. The usage of supported wallets by advanced cryptocurrency users allows them to purchase cryptocurrencies directly without utilizing an exchange at all.

You must register an account and link it to a payment mechanism, such as a bank account or debit card, in order to purchase altcoins via a cryptocurrency exchange. You can start investing in altcoins once your account has been formed.

The Bitcoin model served as the inspiration for alternative cryptocurrencies. They open up new opportunities for the creation of new cryptocurrency applications by enabling the blockchain technology to be used to execute agreements between two parties.

Altcoins are growing in popularity, with thousands of them existing. No single altcoin may ever be able to unseat Bitcoin as the top cryptocurrency, but altcoins as a whole will continue to chip away at Bitcoin’s market share.

By focusing on extra features like smart contracts or low price volatility, alternative cryptocurrencies have set themselves apart from Bitcoin.