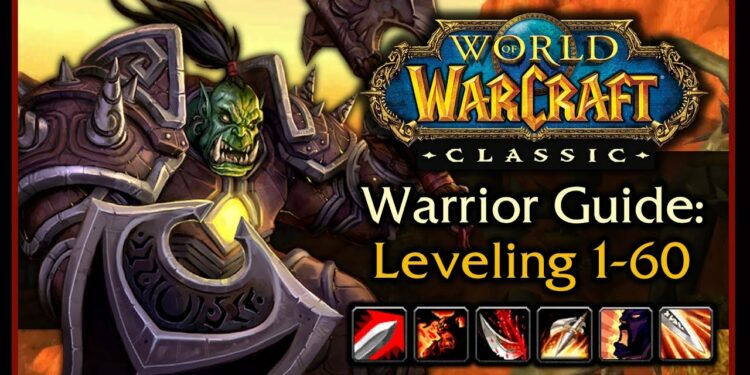 The Warrior is one of the most popular yet misunderstood classes in World of Warcraft. People often have it as the go-to option yet a lot of folks are still put off by the seemingly arduous process of leveling it. Given that there are plenty of secrets to be uncovered in Azeroth, it’s quite understandable why some would prefer to go via other routes. Be that as it may, let us tell you right here and now that the effort you put into leveling up a Warrior pays in dividends!

Though leveling up a warrior is by no means an easy task, it’s still very much doable—provided you approach it the right way. With this nifty guide, you’ll be able to zoom your way from level 1 to 60 faster than you can say Azeroth. OK. So maybe not, but it’s still fast. Hold onto your precious WoW Classic gold and take some notes because here’s how you do it!

Generally, players will need to key in on a few points throughout their quest to level up their warrior. In the case of battles, it’s advisable for players to combat enemies that are of equal leveling. But don’t worry. Should you not be among the “risk-takers” of the bunch, fighting mobs that are one or two levels beneath you can still yield you a substantial amount of XP. And while we’re at it, make sure to be efficient with your use of rage—while also not being stingy! Since you’ll be right in the thick of the action, you’d be wise to remember to stock up on ample food and first aid as well. This way, you can keep the action going without having to worry about your overall health.

Now for the nitty-gritty! Starting from the bottom may seem like a daunting task at first, but it’s a journey that has its rewards. Don’t be in too much of a rush to get to the end—it’s the struggle that makes it worth the effort! But to lighten your load, you’ll want to approach your leveling from 1-39 by kicking off with 2H Fury right until 40. After that, focus on respec to Arms for Mortal Strike. To top it all off, cycle back to Fury and give it a coup de grace of 5/5 enrage.

Things will start to get rolling once you hit level 40. At this point, you’ll want to channel your focus to respec to Arms for Mortal Strike and then follow it up with a build worthy of your character. Now this is where it gets tricky. The general consensus among the World of Warcraft populace is that you shouldn’t dual-wield while leveling. The reason being is that it hampers the off-hand damage output (to only about 50%). However, we’d be remiss if we didn’t tell you that it’s also a viable option under one circumstance: you’re Fury! This is because double swings have a way of increasing your crit chances.

Leveling up a warrior is a natural yet fun and complicated task. The struggles you have early on will make the task so much more rewarding in the end as you reap its rewards. Much like hunting for ever-elusive WoW Classic items, once you reach the end, all the trouble will be but a fleeting memory.

Do you have any tips for leveling a WoW Classic warrior? Do share your trade secrets with us and the rest of the WoW faithful by dropping a nice comment below!

Meta Description: The warrior is one of the most formidable classes in World of Warcraft. Here’s a nifty guide to help you level up one from 1-60 for more WoW Classic gold!

Gaming Glasses Benefits – Why do you wear them all the time?