Hp vs. Lenovo: Which Laptop Brand Is Worth Your Money? 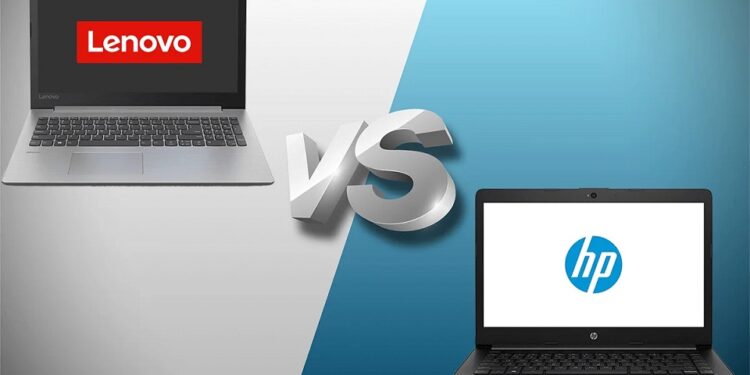 Are you having a hard time deciding between HP vs Lenovo laptops?

The pandemic made laptop sales soar through the roof because of how essential they are nowadays. People use them to work from home, entertain themselves, and keep in touch with others during this global health crisis. Some opted for desktops, but laptops won because of how convenient they are.

What’s great is that some brands produce laptops that are as powerful as some PCs. Among them are HP and Lenovo. This is why you see a lot of people debate between which one is better over which.

We’ve put together a guide to inform you about which brand is better at what aspect. Read on to know what you should look for when you’re out shopping for a new laptop!

What makes HP and Lenovo distinctive is that they have a beautiful appearance. Most laptops often have a dull look to them, making them easy to confuse with other brands.

At first glance, it looks like HP laptops are following the trend. However, once you open up their laptops, you can see that they have a unique appearance compared to the usual brands.

They have a wider area for you to rest your hands on at the bottom for when you’re typing. They also have a sleeker profile on their keyboards, making it easier for people to type on them.

Lenovo laptops often have a much better outward design. They’re prettier to look at even when they’re closed. Lenovo also pushes its advantage in design with the crazy laptops they come up with.

If you’re not sure of what we mean, you only need to take a look at Lenovo’s ThinkPad. It’s enough proof to show you how the company designs its laptops.

Most people decide which brand to choose based on the display of the laptop. This is because many are looking to use these laptops to edit photos and videos. The display also helps when using a laptop to play movies and watch TV shows.

Lenovo laptops often have good enough displays thanks to how they’re made. With the ThinkPad X1 Yoga, you can see how good the company can be with their displays.

This laptop has a 14-inch screen, which is quite small, but it makes up for its size with a 2560 x 1440 HDR display. It also has the capability to replicate 201% of the sRGB color gamut of any media it shows. This is a surefire way to enjoy whatever media you have displayed on your screen.

HP has a slight edge over Lenovo on this aspect, though. This is because the main functions of HP laptops are to manipulate different media and showcase them at their best. HP produces their laptops with that in mind, giving them a better score in display quality overall.

While the Lenovo ThinkPad sets the bar high, HP’s Spectre x360 takes it even higher. It has a 15.6-inch screen that is then elevated by 4K, OLED display. It also showcases 258% of the sRGB color gamut.

Keep this in mind if you’re looking to choose between HP and Lenovo laptops.

How good a laptop performs will determine how smooth the processes it runs will be. No matter how good the display is, if the laptop has poor performance, you won’t be able to enjoy it.

HP often has no problems when it comes to testing its performance. Editing multimedia can prove to be a hard endeavor, after all. This is often because they have amazing components to help them along.

Most HP laptops have 8GB of RAM by default. This helps users switch between windows while they’re working on their projects. It also proves to be useful when browsing the web with a high number of tabs open.

They also have good processors, often coming from Intel. These are good enough to help their laptops produce enough power to showcase media at their best.

Lenovo doesn’t have any competition in this regard, though. While HP laptops are good enough to run different editing software at once, Lenovo can also do this but with the added factor of running games at the same time.

Lenovo is a brand that focuses more on the gaming side of things. This means that the laptops they produce are monsters that can often run the latest games on the market.

With more people turning to gaming and live streaming during the pandemic, Lenovo laptops may be what you’re after. They enable you to run streaming software and the games you’re playing at the same time without any issue.

Of course, you’ll want to make the most out of your new laptop. This is why many companies add tons of features to their products. It will make it a better investment for each buyer in the long run.

HP and Lenovo laptops share some unique features, among which are their laptops being 2-in-1. This is a popular trend nowadays, where the screen can fold all the way to the back. Some variants even have a battery pack installed on the screen.

Some allow users to detach the screen and use it as a tablet for their convenience. These have touch screen capabilities.

HP even has Wacom compatibility on most of their laptops. This is where HP’s unique features end, though.

Lenovo laptops bring more to the table by being more lightweight. This makes them better business choices, as you can set them up and use them anywhere you like with ease.

They also have the edge in battery life. By default, HP laptops often have better battery life per laptop. The only problem is that there’s nothing else you can do to extend them beyond buying an external power source.

Lenovo laptops have built-in features that allow you to extend their battery life. These allow you to manipulate how much processing power it takes to run different programs.

Both Lenovo and HP have a large selection of laptops for you to browse. HP will come out on top initially since they’ve been a part of the industry longer than Lenovo. You’ll have no shortage of choices when you browse the market for their laptops.

If you don’t count the older generation of laptops, though, you’ll notice that Lenovo will have the bigger catalog. This is because they’re focused more on providing their customers with choice.

If you’re looking for business laptops, HP is often the better choice. Most of their laptops have a thinner profile, making them easier to carry around. It’s also a great way to ensure you can do your tasks no matter where you are.

If you’re looking for gaming laptops, though, Lenovo is the only choice. As mentioned above, they’re more focused on the gaming market right now. This means that you have, and will have, more laptops to choose from.

What good is a laptop if you can’t use it? There are many reasons for a laptop to stop working as intended all of a sudden. When this happens, you’ll need to contact support to help you troubleshoot the problem.

This is an area where HP tends to lack. Customers know to expect quite the wait when contacting support on the phone. They more than make up for this with their online customer support, though.

Lenovo has a much better grasp of customer support. No matter how you reach them, be it by phone or web, you’ll often get a quick response. They even have forums where community members help each other troubleshoot common issues.

The biggest difference between Lenovo vs HP devices lies in their pricing. HP laptops often have a high price tag because of their brand. Their reputation in the field allows them to mark their prices as high as they want.

In turn, they provide us with what we pay for. Lenovo also does this, though at a lower price, too!

In fact, they offer more than HP does on low-tier and medium-tier laptops. The laptops you can get from Lenovo have much better performance than their HP counterparts. For their prices, Lenovo laptops are much better overall.

They even have considerable price drops every time they go on sale. Look at these laptops to see how much you’re saving every time Lenovo goes on sale.

Do you want to get yourself a new laptop? Choosing between HP vs Lenovo laptops is the way to go. Take your pick between the two titans in the market and get the best laptop for yourself today!

Do you want to dive deeper into the gadget, gaming, and PC-building community? Check out more of our guides to learn what the latest trends in the communities are now! You can also pick up a little something about gadget optimization with the help of our posts!

Basic Items to bring when Going to the Beach